From January 21st to January 28th, Apple ran a promotion on its App Stores: Get Productive.
I was lucky enough to be asked to participate on the Mac App Store with Yoink, my app that improves and simplifies drag and drop on the Mac.

I thought I’d share my experience with this promotion and some of the stuff that went on behind the scenes.

It started at the beginning of January, when I received an eMail from a very nice person at Apple, asking if I was interested in putting Yoink on sale for a promotion to happen later in January. I didn’t think too much before responding that I would love to participate – after all, when Apple asks you to participate in a promo, you participate in that promo, there’s no question about it.

It’s not the first time the app partook in a promotion.
In February 2013, Yoink was part of a three-weeks-long productivity promotion on the Mac App Store called “Get Stuff Done” (Yoink was part of the third week – “Utilize”): 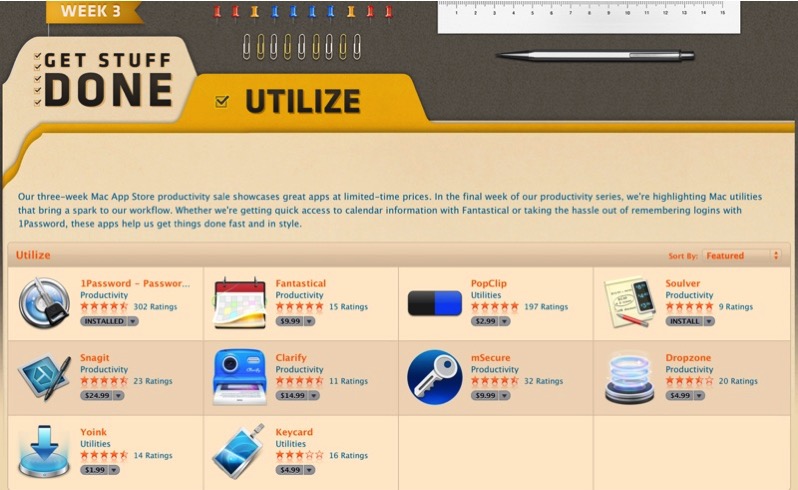 Thankfully, Yoink did pretty well in that promotion and I think that may have helped in making Apple consider it for this promotion, too.

In case you’re wondering, I don’t have any access or connections to the powers-that-be of the Mac App Store.
However, I do contact them (very rarely, mind you) through iTunes Connect ahead of time if I have a substantial update coming out with information about what’s new and what technologies are used in the update. I do not recommend contacting them about every update you put out – that can only be bad for you, I’m sure.

Pushing my luck, or: Trying to get ScreenFloat included

I realize I should be counting my lucky stars getting one app featured in this promotion.
The thing is, I really believe that another app of mine – ScreenFloat, which takes screenshots and puts them in front of all windows so they’re always visible as a reference to whatever you’re working on – would have been a good fit for the theme of “Get Productive”.
In my mail to Apple, I mentioned ScreenFloat, described it in one sentence and asked if it would be considered.
They did, but the app apparently didn’t make the cut. Since that was what I was expecting anyway, no harm was done and as far as I can tell, they didn’t find it too pushy. Quite the contrary; they seemed very thankful for the suggestion.
I did not receive information about why it was not included, but I have a guess:
I think perhaps the reason they decided not to include ScreenFloat in the sale was its lack of localization – ScreenFloat is localized in English and German, whereas Yoink is available in English, German, Japanese, Simplified Chinese, Korean, Portuguese (Brazil and Europe), French and Italian. Or maybe that it hasn’t received an update in a while (although I am working on version 2.0 these days).

Holding Back an Update

As you’re probably aware, when you release an update on the App Store, its current reviews vanish, the star-rating is averaged over all versions and the new version has 0 (zero) stars.
I was about ready to release an update for Yoink when Apple contacted me, and I knew I had to postpone releasing that update, since if I released it, no stars would be shown next to the app, and I think it does make a difference – it looks much more enticing with stars than without:

Yoink listing without stars on the Mac App Store

Yoink listing with stars on the Mac App Store

I generally dislike withholding an update to my apps (as I regularly fix bugs and I don’t like knowing that a version with bugs that I have already fixed internally is still out there for users to use), but in this case, I had to make an exception.

It came as a blessing in disguise anyhow since it gave me some extra time to test the soon-to-be-released update and make sure the new Force Touch integration was working as expected.

The Effects of the Promotion

I am more than happy with the results of the promotion. Then again, there’s bound to be a big impact on sales when Apple puts your app (along with other developer’s) in front of (potentially) all Mac App Store users.
Apple calls users to action beautifully (see the first image of this post) – a nice banner with icons of popular apps along with the tag line “limited-time prices”. I know that gets me pushing the Purchase button.

As expected, I noticed a significant jump in sales during the promotion.
I’m uncomfortable sharing numbers (something I need to overcome, other developers have shared their numbers and it’s always been helpful), but here’s the curve before, during and after the sale from iTunes Connect:

Yoink’s sales graph before, during and after the promotion

James Thomson, developer of PCalc (Mac / iOS), which also participated in the promotion, has also shared his curve on twitter.

When the promotion began, Yoink was not in the Top 100 of the Top Paid category in the US at the time.
On January 21st, the app started rising, went to the 43rd place, and on January 22 had its best spot at position 13. It hovered around that spot until the end of the promotion a week later.
It rose to the Top Paid Top 10 in several countries, including China, Japan, Germany and Austria.

I did not see a significant increase in the number of reviews – however, the ones I did receive during the campaign were written in China – something I attribute to the fact that, with a recent update of Yoink, I localized it into Simplified Chinese. I haven’t gotten many reviews of Yoink in that country before, so that’s a safe bet.

Surprisingly, requests for support (by mail, twitter or facebook) didn’t come in in the amounts I was expecting and I think that’s a good indication that Yoink is working reasonably well.
Not getting support requests can mean two things: No one purchases it or the software is working more or less without major problems.
Regarding the amount of copies sold, I take not seeing a big bump in support requests as a good thing. 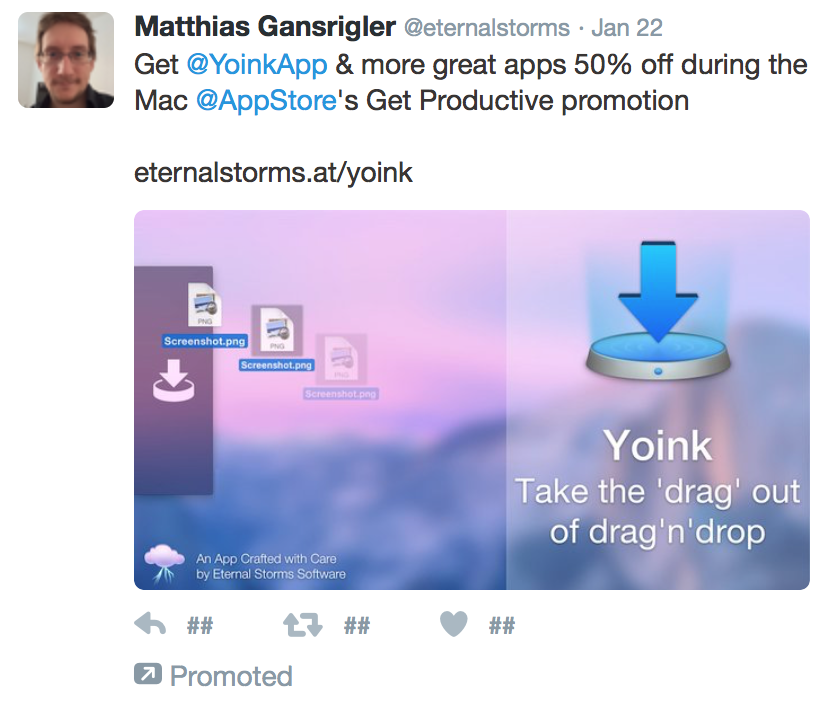 As I mentioned on twitter, I gave Promoted Tweets a try. I put €200,- (around $215) into it and I think it’s safe to say that it’s the most expensive way for me yet of reaching people. On the other hand, the targeting is first-class. 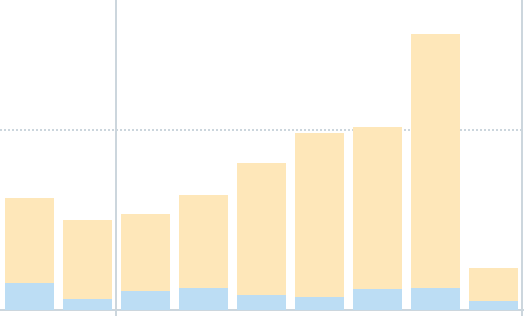 I hand-picked 100 twitter accounts that I thought were relevant to the Mac community (developers, app-accounts, bloggers, journalists), chose interests that I thought were relevant to Yoink and let it fly.
I reached 55.813 people, resulting in 4.142 “engagements”, a conversion rate of 7.4%.
For $215, I can get banner ads on websites that yield 170.000 views and up, but the engagement rate there is much lower.
What is an “engagement”, exactly? It’s a click on the tweet, a click on your profile, a click on the image, a click on the link, a “like” or a retweet. So the engagement rate of 7.4% itself is more or less meaningless.
According to Twitter, I received 35 direct clicks on the link. Thirty-five. That’s an engagement rate of 0.06%. Pretty expensive advertising indeed.

The funniest thing is that some of the people “liking” the tweet ended up blocking me as “spam”. One reply of the two I received was this image:

I ended up on a couple of lists with the specific purpose of blocking me, since I had an ad on twitter. Granted, those were most likely Twitter users who weren’t ever inclined to purchase my software and there are no hurt feelings, I just found it funny.
Seems some users on twitter don’t realise there’s advertisement and figured I spammed them somehow.

In the beginning, I ran a tweet with a link directed to Yoink on the Mac App Store, which later on I discovered was a bad idea.
Most of the users I targeted with this tweet use Twitter on their iOS device and when you open a Mac App Store link on iOS, you receive this: 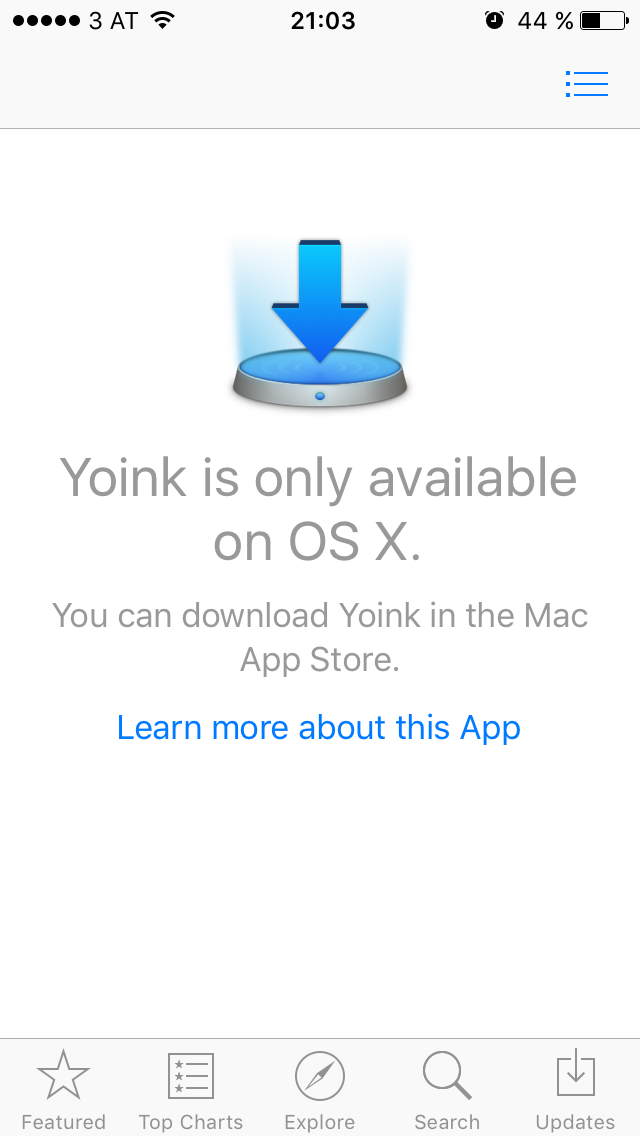 Yoink in the iOS App Store

When you click on “Learn more about this App”, it does take you to the app’s website, but that’s another tap most users are not willing to do.
I changed the link to take them directly to Yoink’s website and only lost about 4.000 views. My bad. (I filed a radar to improve the “Mac Apps page in the iOS App Store” here).

I didn’t like linking directly to my app. I’d rather have linked to the sale, the promotion page where all apps are shown. As far as I can tell, however, that is not possible as of yet (I filed a radar for it, too). It is definitely something that could be improved for future promotions.

Maybe the sponsored tweet may have raised the awareness of Yoink among some users, but I don’t think it was worth it. Perhaps an even more targeted audience would have helped.

Being featured by Apple seriously helps you in getting new customers for your app and I’ll do it again any time they invite me.
Sponsored tweets? Quite expensive for little to no effect (in my case – mind you, it was my first sponsored tweet and I might not have targeted it right. Next time, I might go for a sponsorship of a popular blog instead).

If you enjoyed this blog post, perhaps you’d like to join the Eternal Storms Software Newsletter where I write you once a month at most about what’s going on with my apps and on my blog 🙂 Thank you.

1 thought on “Post-Mortem: The Mac App Store’s Get Productive Promotion”