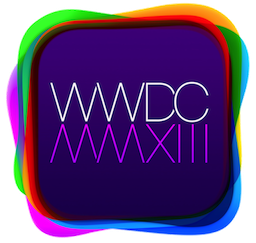 If you haven’t seen yesterday’s (Monday, June 11th, 2013) WWDC keynote yet, you can watch it here on Apple’s website.

The keynote started with a very inspirational video. It’s a direct answer to recent ramblings about how Apple have lost their drive or stopped innovating and it somehow gave me the feeling it’s a direct successor to the famous “Here’s to the crazy ones“. A mantra Tim Cook doesn’t get tired of sharing any chance he gets – It’s all about the best product they can possibly make.
Watching this video literally made me think “This is going to be a WWDC keynote we’ll remember for quite a while”.

seemed very energetic and enthusiastic about what he had to tell us. Frankly, I think it was the best performance from him yet. His voice was also not as ‘whispery’ as usual but a little louder and more profound. He seemed happy to be there and excited to be sharing new stuff (probably because he got tired of all those stupid “What’s Apple going to do next” questions – I’m looking at you, D11 – and finally had to show something new, silencing those questions)
And as a plus, he said “Only Apple could do this” just once which is a plus in my book. At past occasions, I think he overdid that phrase a little.

was, in a word, epic. Drew Wilson nailed it, in my opinion. He’s naturally funny and doesn’t ignore what’s going on around him, reacting to reactions from the audience, which, if not overdone, is a very good thing, loosening up everyone involved.
He’s a natural at giving presentations and he has fun doing what he does. A class act all around. I’d like to see him more often.

The way Craig talked about the textures in OS X (specifically, Calendar) and iOS (specifically, Game Center), I wonder if he played a key-role in Scott Forstall’s ousting.

And later, when demoing iOS 7:

“We just completely ran out of green felt and wood – this has got to be good for the environment.”

No, I don’t think Federighi and Forstall were very fond of each other. But what do I know, perhaps he was making fun of himself 😉

was solid and fun, as always. “‘Stopped innovating’ my ass” was, obviously, one of the best lines in the keynote. Seems to me he’s always the one to comment on certain publications in keynotes in a fun way, and that’s what I like about him. He doesn’t ignore those things but addresses them head-on.
Yes, he did mix up Firewire 2 with Thunderbolt 2 when introducing the Mac Pro, but who cares? It’s a new friggin’ Mac Pro!
Phil’s a very down to earth, straight up guy, very sympathetic.

I actually ‘met’ him during the WWDC 2004 Campus Bash – he was eating a taco (they had a make-it-yourself-taco-bar) and I was so stunned he stood in front of me all of a sudden, I just nodded at him and he nodded back. Yes, we’re the bestest buddies now!

He’s even cooler in person.

I frankly can’t remember the last time we saw him in a keynote (if ever), so I can’t really compare this one to previous appearances.
That aside, it was a decent performance, though I feel he lags behind the others – maybe because he hasn’t had too many chances to present at a keynote.
He did seem excited about iWork for iCloud, though, and I hope for his and his team’s sake it doesn’t share the same fate as iwork.com which was in beta for a while and then cancelled without much fanfare.

Also a decent performance and I bet he’s got a new friend in US Senator John McCain.
I wish he had mentioned something about improving iCloud’s key-value storage, though. But I guess that’s something that will be probably handled less publicly at WWDC’s sessions and labs.
It’s nice they’re introducing new services (like iTunes Radio), but their existing services could use some love. Seriously.

Enough about the presenters, let’s talk about the announcements they made.

First off, I keep calling it Maverick, as Maverick_s_ seems too “plural-y” to me.
It’s a name like MacBook. I can’t say how much I hated that name. But now, I love it. iBook and PowerBook seem odd to me now, and I think it will be the same with the new naming scheme of OS X.

But right now, I actually would have preferred Sea Lion. Change is hard.

was just a matter of time. I don’t quite understand why it took so long – I think it might be a marketing thing, to have something exclusive for iPad/iPhone. Create momentum there and bring it back to the Mac to use that momentum some more.

Maps’ ‘Send location to iOS’ is awesome. The interface seems very minimalistic (which isn’t a bad thing), however, after all the textures I was used to from OS X (Mountain) Lion, it looks naked. But it’s just a matter of getting used to it again.

Calendar.app is stripped down to its bare minimum, also – no textures. It looks very nice and will look even better once I’m used to it again.

Finally that fullscreen button in the windows’ top right corner is actually usable. With OS X Mavericks, fullscreen is finally the way it should have been from the beginning.
SecondBar got sherlocked as the menu bar is now shown on the second display and the Dock can be summoned there.

AirPlay Display is a very welcome addition, though I do not own an AppleTV. But any way to extend the desktop is very fine by me.

‘Finally’, is all I can say for the tabs. And they will make Yoink more useful as well.

Tags are Spotlight comments taken mainstream. Good move. And an important step in the no-filesystem-direction.

The improvements made on the core of OS X amaze me. It really shows how smart the people working at Apple are.

Timer coalescing and memory compression are great new ways to improve CPU- and memory usage. And even things where you’d think that after 9 releases, there would be no way to improve upon them, were indeed improved upon, like video- and audio playback, which uses up to 35% less energy.

App Nap fits in well with the energy saving ideology introduced in previous OS releases with automatic and sudden termination.

Albeit, it’s not only about saving energy, it’s also about freeing up resources for applications in the foreground that really need them.

It’s great to see so much love for OS X and the Mac again. The advancements and improvements made show that Apple is still very much interested in the Mac and its future. At least for the next decade (both Craig Federighi and Phil Schiller said something about “the next ten years” – though I shouldn’t read too much into that).

On another note, I wonder why some of the icons – or the interface in general –  weren’t changed to be in the same vain as iOS 7’s. But then again, even the iPad (beta) version of iOS 7 isn’t finished yet and I imagine OS X would be an even bigger undertaking. Perhaps there’s another ‘Back to the Mac’ event coming.

Speaking of the Mac – Apple finally introduced a new Mac Pro (by the way – if you haven’t seen Apple’s website for the new Mac Pro yet, you really should – it’s very well done!).

And what a Mac Pro it is. It’s breathtaking.

I can’t help make the comparison to the (sadly ill-fated) G4 Cube (and, as pointed out to me by @F451 on twitter, the 20th Anniversary Mac). I think it’s the Cube done right, cylindrically – though I don’t know anything about the price, yet. I just hope it’s priced aggressively.

Phil Schiller said it’s unusual for Apple to show a sneak peek of a future product. But for the Mac Pro, it was the right time.
– Pro customers were getting restless (there was a lot of talk about Apple ignoring the needs of its Pro customers)
– They aren’t sold in Europe anymore
– The last (very minor) update was a year ago and
– I don’t think too many people were buying them anymore.
So the fear of cannibalisation by a future product was non-existent.
This was the right time.

To be honest, I’m not too interested in web apps. I haven’t once used anything on icloud.com or the ill-fated iwork.com beta.
There’s probably a sophisticated strategy behind the web version of iWork, but I’d rather they put those efforts and resources into a new version for the Mac.

Alas, Rosner assured us there would in fact be a new version of iWork for the Mac and iOS coming later this year and I’m very excited about that. I just wish they’d presented that instead of the web apps.

Man, there’s  a rift going through the iOS community. People I follow on twitter are either ecstatically pleased about the new changes or devastatingly disappointed and appalled.

As far as I’m concerned, I like it – very much so.
I don’t like a couple of icons (most gradients look weird and the Safari icon doesn’t look good at all to me), but everything else I’ve seen so far is pretty neat (which isn’t much, I have an iPhone 3GS so I can’t even install the beta, I guess it’s finally time for me to upgrade… or get an iPod touch).

Control Center is a godsend and way overdue – and the one new feature I’m most excited about in iOS 7. How much time I wasted drilling into the settings to disable WiFi, the cellular network or Bluetooth, I don’t even want to think about it.

As I said before, Tim Cook doesn’t get tired reiterating what Apple’s goal is:

And another video is played. “This is it. This is what matters.”

I think this was one of the best keynotes. They all were on their top of their game, and the stuff they had to show was breathtaking. Makes me even more inspired to work on my own stuff.

I wish I was at WWDC this year. Sadly, 71 seconds is what it takes my ISP to connect to developer.apple.com/wwdc … 😉