In  “What I…”, a monthly column, I take a look back at what went down over the course of the passed month.

As you can tell by the title of this blog post, I missed the last two months – my apologies.
It’s partly that I’ve been busy and partly that I couldn’t really get into my blogging mood and -mindset.
But now I forced myself to finally get down to it, so here’s what I…

On a hunch that Apple would show-case apps that adopted the new MacBook Pro’s Touch Bar on the Mac App Store, I set out to add support for it to my still motion video app, Glimpses.
The API is lovely, so I made progress fast – implementing and testing took about 2 days altogether.
Touch Bar in Glimpses allows you to import photos from flickr or Instagram, sort your photos and adjust your project’s settings and more – all without having to look up from the Touch Bar.

Sadly, it didn’t make the cut for Apple’s “Enhanced for Touch Bar” Mac App Store-feature – even begging didn’t help, like, at all…
I wish Apple would give some feedback to developers as to why an app was (or wasn’t) chosen – does the app just suck? Does it not sell enough? Is the rating too low? Does the Touch Bar implementation suck?
Nonetheless, now I know about the Touch Bar APIs and I can put that knowledge to good use in some of my other apps for sure.

A simple bugfix update, version 3.2.1 fixes a bug with “private” dragging pasteboards, reacts to memory pressure events and cleans up stuff it doesn’t need and fixes a nasty bug where the video in the preferences’ “Behavior” tab would play, even if the preferences window was closed.

Right after implementing Touch Bar support in Glimpses, I took to Transloader to see how (and if) it would work there, and I think can make things more accessible, like when switching between different views (these GIFs are of a software that’s still in development, so things might change before release) :

Other than that, I’ve been spending a lot of time on the “backend” (read: CloudKit) side of the app – the stuff that should just work and the user never gets to see. I’m finally happy with the approach I’m taking (which I wrote about here), so now I can polish it up.
I’m also working on the UI of course and am playing around with alternate progress bars instead of Apple’s standard progress bar UI: 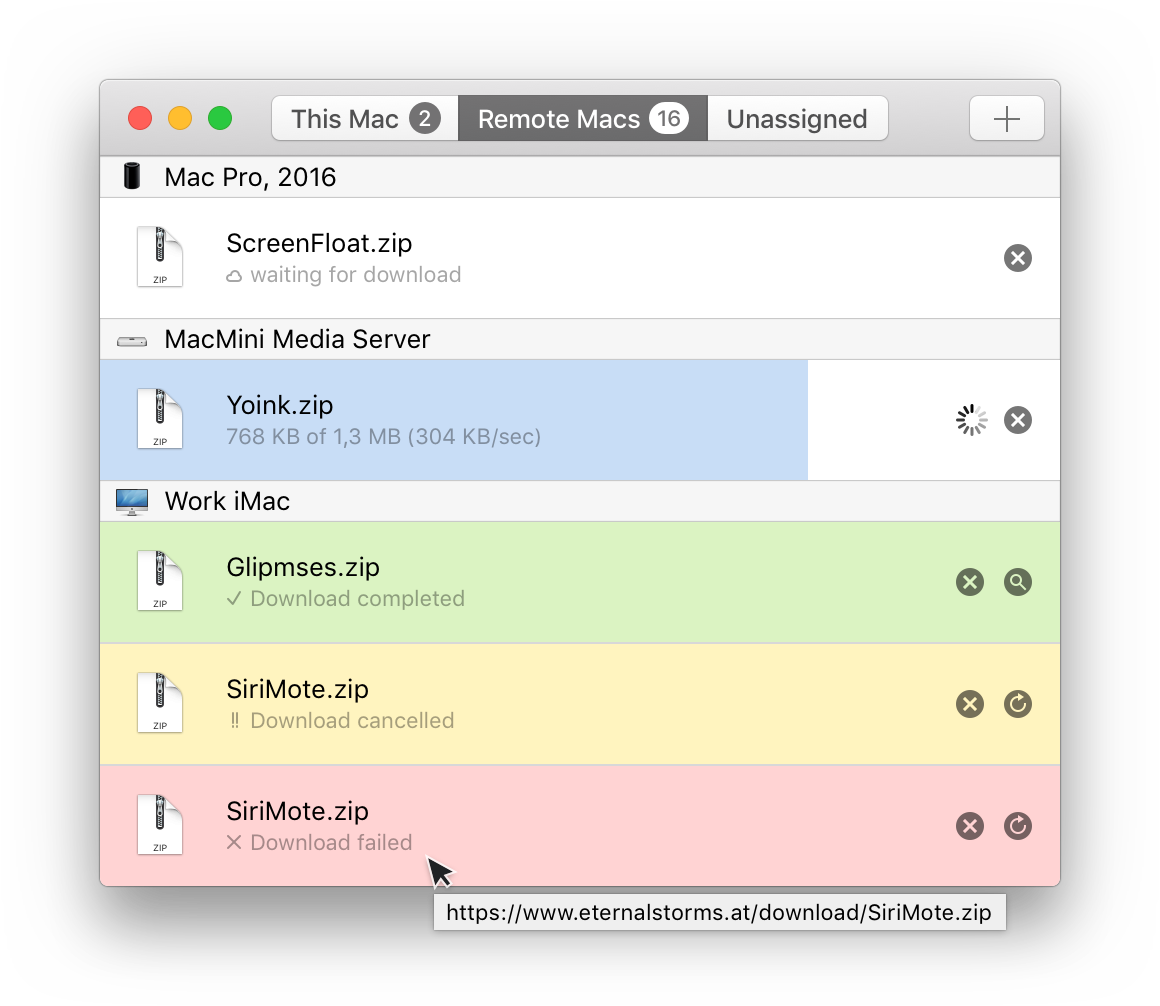 It’s very easy to see if a download has succeed, failed or was cancelled, or how far a running download has progressed without having to read the status below.
Transloader 3 is progressing slowly but nicely, and I hope to be able to make an announcement in the first half of 2017 (yes, that’s very vague, but I’m not good at keeping my own deadlines and I don’t want to commit to a date too early).

Worked on someone else’s code base

For someone else’s iOS app (which I can’t talk about), I had to work on a very complex code base I was completely unfamiliar with.
One part of the complexity comes from its very extensive sync API (basically anything you do in the app is synced back to the server) and knowing the current state of data in the app, the other part is that it uses Core Data, which I only ever read about but never actually used.
Naturally, I had to go through a pretty steep learning curve (including Core Data), and it didn’t help that the initial coding was outsourced to a seemingly unexperienced developer from India, as some parts of it are very, very confusing and sometimes implemented twice or more.
Incidentally, for Christmas, my brother gave me the book “Your Code as a Crime Scene”, which helped identifying parts that needed attention and belonged together – I can wholeheartedly recommend that book.
The app is a very compelling and interesting project and gets me to think about another app besides my own – a break can do wonders on how you view certain problems or issues.

After having been featured in ‘New Year, New Habits’, a front-page feature of the Mac App Store all through January 2017, Yoink was (silently) removed by the Mac App Store’s Editorial team from its ‘Invaluable Utilities’ feature.
I noticed by chance, and this pretty much sums up how I reacted when I saw it:

Of course I went on to iTunes Connect to see if everything was in order with the app – it was – so I decided to write Apple directly (I don’t have any contacts in their editorial team – does anybody besides the big guys? I just used iTunes Connect’s ‘Contact Us’ form).
Unsurprisingly, they couldn’t tell me anything. I thought perhaps they could tell me the app was not updated frequently enough (which I doubt, since other apps in that feature were last updated earlier than Yoink) or that it didn’t receive enough ratings, but I got the standard “the editorial team giveth, the editorial team taketh away” response. I really wish Apple were more transparent here – it would only do the developer economy good, knowing where you’d do well to improve.
Anyway, the feature has been removed from the Mac App Store entirely now, so perhaps a new Utility-promotion is coming our way on the Mac App Store soon?

A great game I’m playing on my Apple TV – always reminds me of playing the Zelda games with my cousin. Good times.
At first I thought using the Apple TV Siri Remote to play it would be clumsy and a turn-off, but it works surprisingly well. I’m not quite done with the game yet, but I’m very close to the end.

If you don’t have time to spare (which I don’t) or accidentally spend way too much time on that particular game you just can’t get enough of (which I do), do not – I repeat: do not – get this game.
It’s awesome and will make hours seem like minutes. Seriously.

I’m notoriously under-hydrated. I drink some coffee in the morning and maybe one, or two glasses of water over the course of a day. Now, that might be enough, as some say, and it might be way too little, as say others.
I’m giving it a try and so that I can keep track of things, I’m using WaterMinder – an app very well designed to take care of these water-intake-tracking-needs.

“Five prominent biophysicists have warned the United States government that sterilization procedures for returning space probes may be inadequate to guarantee uncontaminated re-entry to the atmosphere.”
Michael Crichton sure was a genius.

I gave this book to my girlfriend Britta for Christmas and somehow wound up reading it before her – even though I’m quite skeptic about these things (aliens being the ones who created us thousands of years ago), I still enjoyed reading it a lot – it gives you a different perspective on things.
“Transporting readers around the globe, Ancient Aliens® explores the fascinating enigmas and mysterious artifacts our ancestors left behind, from incredible objects to amazingly accurate ancient maps; from the Great Pyramid of Giza and stone megaliths at Gobekli Tepe to the Nazca Plains and mysterious structures of Puma Punku.”

Your Code as a Crime Scene (pragmatic programmer)

As I stated before, I received this book from my brother for Christmas and read it in about two evenings.
“In this book, you’ll learn forensic psychology techniques to successfully maintain your software. You’ll create a geographic profile from your commit data to find hotspots, and apply temporal coupling concepts to uncover hidden relationships between unrelated areas in your code.”

Designed for Use (pragmatic programmer)

“Expert developer and user interface designer Lukas Mathis gives you a deep dive into research, design, and implementation – the essential stages in designing usable interfaces for applications and websites.”
I’m still reading it, but already I feel like I know a lot more about how I should go about future projects – BEFORE writing code 😉 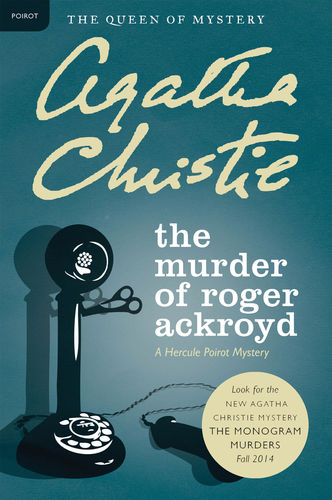 Having read “Death on the Nile” (after having seen the movie like a gazillion times), my mind is now set on reading all books featuring one Monsieur Hercule Poirot by Agatha Christie.
“Village rumor hints that Mrs. Ferrars poisoned her husband, but no one is sure. Then there’s another victim in a chain of death. Unfortunately for the killer, master sleuth Hercule Poirot takes over the investigation.” 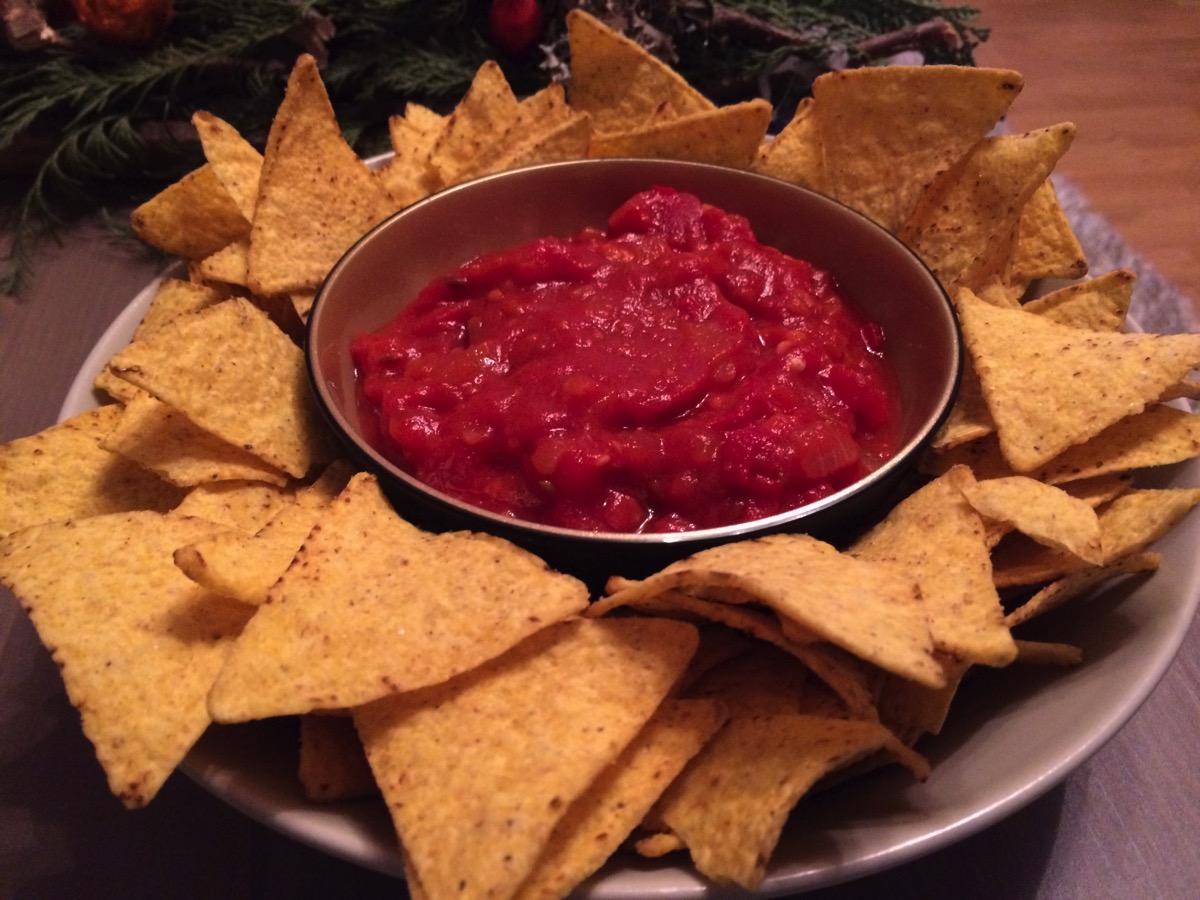 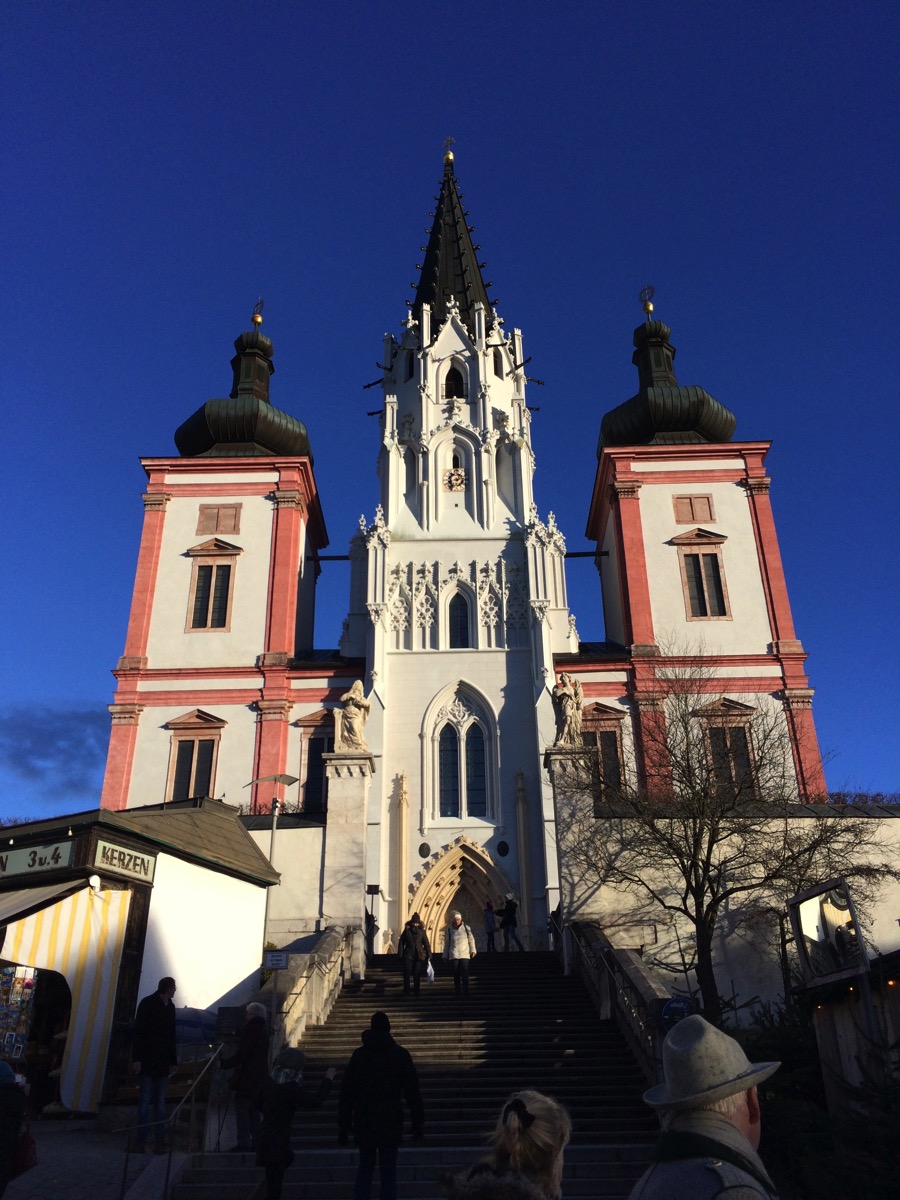